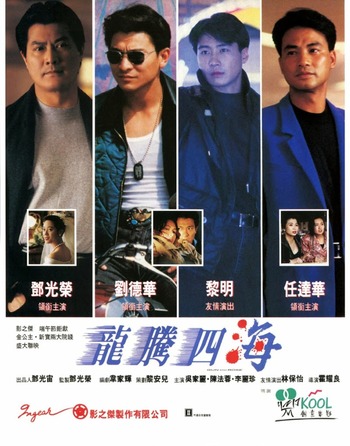 Alan Lung (Alan Tang) is the adopted son of Taiwanese triad leader Lung Yat-fu. Highly favored by Lung, Alan is appointed as Lung's successor, prompting the hatred of his biological sons Simon and Bowie. Simon (Simon Yam), especially, who ends up usurping his father's position and then arranging for Alan's assassination. With the help of local punk and wannabe gangster Andy (Andy Lau), Alan decides to get even with Simon.

Alan pretty much reprises his Hitman with a Heart archetype as previously seen in Flaming Brothers and Return Engagement here, but given that Alan is the Executive Producer of this movie, its evident most of this film is a Vanity Project for Alan, especially how he simply rampaged through wave after wave of mooks Rambo-style and hogging 70% of the film all to himself. Put it simply; Andy Lau, Leon Lai and Simon Yam's collective character development still pales compared to Alan Tang's, and in a Body-Count Competition in the film's various shootouts (if the audience have the time and curiosity to tally-up) Andy, Simon and Leon's combined scores would still be less than Alan's (by approximately 30 points!). Its ridiculously over-the-top and needs to be seen to be believed.

Has nothing to do with the band Guns N' Roses.