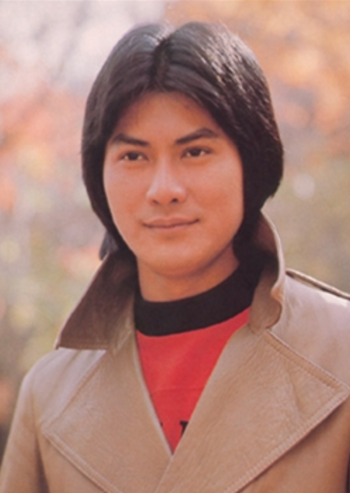 Ever wonder why they called him the student prince?
Advertisement:

Alan Tang Kwong-Wing (鄧光榮, 20 September 1946 – 29 March 2011) was a Hong Kong actor, producer and director known by fans as "The Student Prince", due to his role in the movie, The Student Prince.

Growing up in Hong Kong's Wongkok district as the youngest of four siblings, Alan Tang started his career after spending some time as a model on magazines. After establishing himself as a cinematic icon, Tang acted in over 60 films in his heyday in Hong Kong and Taiwan, as well as in the States (with Dynamite Brothers). Decades after his career took off, his nickname, "Student Prince" still remains as such among his fans.

He started partaking in action films in the 90s, mostly in the booming Heroic Bloodshed genre at the time, and gets to co-star against regulars of the genre like Chow Yun-fat, Andy Lau, and Simon Yam (they played enemies, twice). Besides acting, Alan had a hand in producing some of Wong Kar-wai's films as well, including Days of Being Wild and As Tears Go By.

Tang tragically died of a heart attack at age 46.