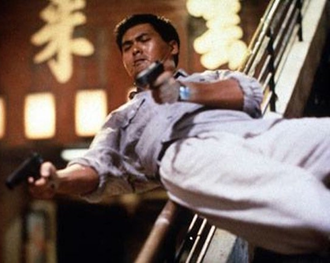 He does this a lot.
"In the West, audiences think I am a stereotyped action star, or that I always play hitmen or killers. But in Hong Kong, I did a lot of comedy, many dramatic films, and most of all, romantic roles, lots of love stories. I was like a romance novel hero."
Advertisement:

He frequently played honorable badasses and tragic heroes in Asia, but is unfortunately typecast into stereotypical "Asian" roles in Hollywood films.

In 1999, Chow was voted as the most handsome action star

in the world. It's not hard to see why.