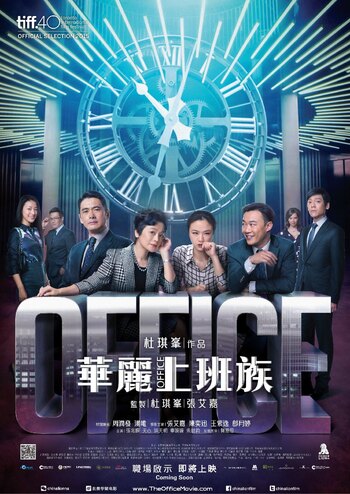 Office (華麗上班族) is a 2015 Hong Kong musical dramedy directed by Johnnie To. It stars Chow Yun-fat, Sylvia Chang, Eason Chan and Tang Wei. Chang also wrote the screenplay, based on her 2008 play Design for Living. The music is by Lo-Ta-yu.

Hong Kong-based Mega-Corp Jones & Sunn is in the process of going public under the direction of its chairman Ho Chung-Ping (Chow Yun-fat) and CEO Winnie Cheung (Silvia Chang), who have been carrying on an affair for years while Ho's wife is hospitalized in a comatoes state. As lawyers and accountants begin studying the books for the IPO, ambitious new employee Lee Xiang (Wang Ziyi) starts to learn the ropes of big business from high-ranking Jones & Sunn officials David Wong (Eason Chan), Sophie (Tang Wei), and Ka-Ling (Tien Hsin) alongside another new arrival Kat Ho (Lang Yueting) who unbeknownst to everybody but Winnie, is Ho's daughter. The business and personal lives of these individuals cross and collide during the audit, which happens over the backdrop of the 2008 financial crisis.

The movie was shot in 3D and features hyper-stylized art direction, depicting the financial world of Hong Kong as a series of translucent wireframe cues with neon lighting. It was released in China and Hong Kong in September 2015.