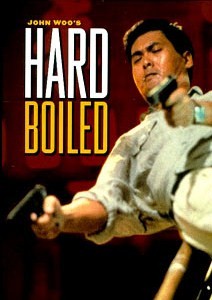 "Give a guy a gun and he's Superman. Give him two and he's God!"
— Superintendant Pang, on Tequila and his "attitude" with firearms
Advertisement:

Hard Boiled (Lat Sau San Taam (辣手神探), or "God of Guns") is a critically-acclaimed action film by John Woo, starring Chow Yun-fat in his slightly younger years. This 1992 action classic has aged very gracefully, and boasts action very few contemporary films can match up to. Has a sequel in the form of a game called Stranglehold, also produced by Woo.

Hard Boiled is all about two cops — one undercover, another much-maligned for always, always playing the Bad Cop — working together to bring down a gunrunning ring (led by Anthony Wong). There is plenty of plot in between which establishes the characters of Tequila (the Bad Cop) and Alan (the undercover cop, played by Tony Leung Chiu-wai) nicely.

But what you're here for are the action scenes, intricately choreographed and masterfully done by John Woo. What Shoot 'Em Up played for humor, Hard Boiled plays absolutely straight - and both movies end up totally awesome (for different reasons).

Johnny Wong guns down a group of innocent people and then kills one of his men when he points out it's not needed.

Johnny Wong guns down a group of innocent people and then kills one of his men when he points out it's not needed.