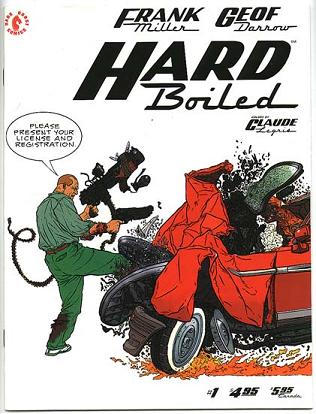 The first issue picks up during Carl's previous tenure as a municipal tax collector, who is on his latest pursuit of a tax evader through an urban hell. The mostly dialogue-free chase crashes through many of the city's environs, including a murder-themed sexporium. The sequence ends with Carl's apprehension of his target, though the physical demands of the hunt leave his life in the balance. Fortunately, he's a cyborg, and his bosses at The Company can rebuild him.

As the story progresses, Carl's seemingly normal life starts looking less and less so—his family knocks him out when strange dreams disturb his sleep, and his memory seems to be so full of holes that he can't remember his own name, frequently referring to himself as "Nixon". Eventually, while (violently) pursuing a delinquent account, he is horribly injured (again) and discovers the truth: He is actually more than a cyborg, he's a robot built by Willeford Home Appliances for use as an assassin, and his family are all paid handlers. The people he was chasing, also robots, attempt to recruit him into their planned revolution against their human masters, but all Carl/Nixon wants is to go back home after a long, hard day at work...