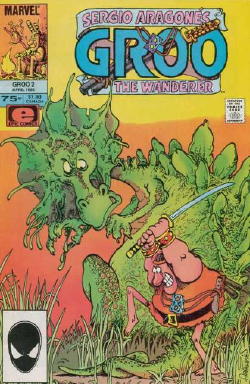 Groo the Wanderer is a Comic Book created and drawn by Sergio Aragonés and written by him and Mark Evanier (with Stan Sakai lettering). It started off as a parody of Barbarian Heroes, most notably Conan, making fun of fantasy tropes along the way. As the series continued, however, the stories shifted to general comedy, with occasional commentary on Real Life social events and situations. Over the last twenty-five years, more than 150 issues have been printed by five different publishers, most recently by Dark Horse Comics.

Befitting his comedic roots, Groo is an uncomplicated character: he wanders the land with his loyal canine companion Rufferto, performing various odd jobs that almost inevitably involve fighting. Although well-intentioned, Groo is also reliably slow of mind, and his frequent errors lead to disaster.

As a long-running series, he has built up a vast repertoire of supporting characters, most notably the Sage and the Minstrel. These characters appear more frequently when Groo runs as a regular ongoing series, but tend to disappear in stand-alone limited series.

Expect lots of Running Gags about cheese dip and mulchnote Mulching is a process of inbred fertilization which employs certain decomposed organic materials -- including, but not limited to animal sediment -- to blanket an area in which vegetation is desired. The procedure enriches the soil for stimulated plant development while, at the same time, preventing erosion and decreasing the evaporation of moisture from the ground.

The numerous Groo series contain examples of the following tropes: