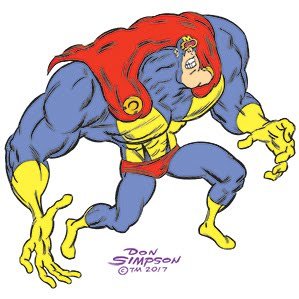 Megaton Man is a biting satire of superheroes comics from artist Don Simpson that started in 1984. The series (and its sister title, Bizarre Heroes) has been published by several companies over the years, including Kitchen Sink Press, Image Comics, Simpson's own company Fiasco, and had a stint as a webcomic and even appeared in Asylum, an anthology comic published by Rob Liefeld. Some old strips, plus a post-9-11-related storyline that Simpson completed and then sat on for over a decade can be found at the official blog