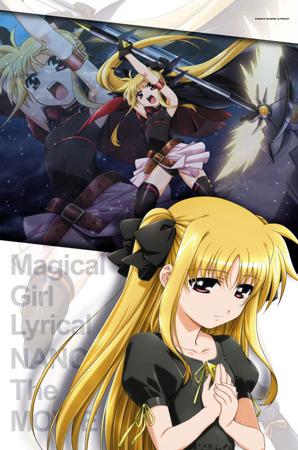 She's not a bad girl. She just needs someone to befriend her.
"She's so strong. And even though she seems so cold, she has such beautiful, kind eyes...
Yet, for some reason, she really looks...incredibly sad."
— Nanoha Takamachi, describing Fate Testarossa in Magical Girl Lyrical Nanoha
Advertisement:

Her greatest fear is to be alone.

Normal Magical Girls have a good relationship with their family members, they make friends at school — they may be a little dim, but that's okay, and this all translates into the magical ability to defend what they love from external threats.

A Dark Magical Girl doesn't have that. For her, Parental Abandonment is not funny or convenient. Her parents are absent at best and abusive at worst, and though she's smart, she can't understand why her life has turned out as it is. She doesn't have real friends or exploits past the academic (if she goes to school). This is because she either doesn't know how to communicate socially or she's already lost her friends and wants to avoid making new ones, the loss of which will just bring her further pain. If she seems outwardly creepy, it's another unfortunate reason people avoid her, which only leads to her being further perceived as evil or otherwise abnormal.

She often acts as The Dragon to the Big Bad, from whom she may crave approval as a parental figure. Inevitably, the Dark Magical Girl will fight the Magical Girl, acting as her Evil Counterpart or Shadow Archetype, her motivation being acknowledgment from the Big Bad or jealousy of everything the heroine has that she does not.

She doesn't want the Magical Girl's pity, but the MG usually tries to reach out to her and gain her friendship regardless. A Magical Girl symbolizes the triumph of virtue, justice, and The Power of Love. A Dark Magical Girl asks if there is redemption and salvation for the cursed and lost. Magical Girl shows tend to come down on the idealist side of the Sliding Scale of Idealism Versus Cynicism, so the DMG almost always gets converted to the good guys' side by the end. Once this happens, most Dark Magical Girls tend to be fiercely loyal to the Magical Girl heroine.

The abilities of the Dark Magical Girl are often polar opposites to the Magical Girl's. She is also usually faster, smarter, and more ruthless than the MG, making her the primary obstacle to the MG's triumph. Younger Dark Magical Girls tend to be Little Miss Badasses, even if they are a Cute Witch. If she is a Magical Girl Warrior, she's frequently a Lady of War. Dark Magical Girl outfits are often color-coded black to contrast the heroines' pink, and are usually slightly more fetishy, which might explain why a Heel–Face Turn doesn't always mean a switch in costume. Dark Magician Girls on the good guy's side tend to be exemplars of Dark Is Not Evil.

As a reminder, the "Dark" in Dark Magical Girl refers to her personality and characterization, not the nature of her powers. In fact, a woman whose powers aren't "dark" in nature can still qualify for this trope if she has the right personality and characterization; as mentioned above, usually the driving force behind the actions of a Dark Magical Girl is some combination of her desire for approval from her parental figure, fear of being alone, or jealousy towards everything the Magical Girl has.