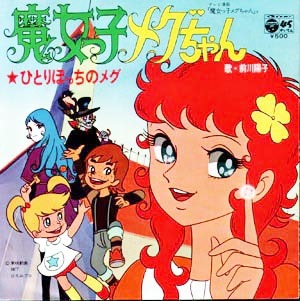 Meg's a Magical Girl and she'll steal your heart!
Advertisement:

Majokko Meg-chan is an early Magical Girl Anime. Based on a proposal by the production company Hiromi Productions as a follow-up to Miracle Shojo Limit-chan, a TV series was made by Toei Animation in 1974, originally aired on what is now the TV Asahi network (then known as NET). This particular story codified many of the tropes that would later become staples of the Magical Girl genre.

The story centers on Meg, a young witch who has been sent to Earth as part of her Magical Girl Queenliness Test. She is adopted by former witch Mami Kanzaki and her muggle family and spends the series learning about human relationships, battling magical enemies, and maturing into a woman worthy of claiming the throne of the Witch World.

In addition to its success in Japan, the series was later broadcast in several European countries, including Italy (where the heroine was renamed Bia and where the show is still fondly remembered), France, and Poland. It was also dubbed into Spanish and Portuguese, but there is no official English version.

As of 2022, the series is being rerun in Japan on Toei Channel.