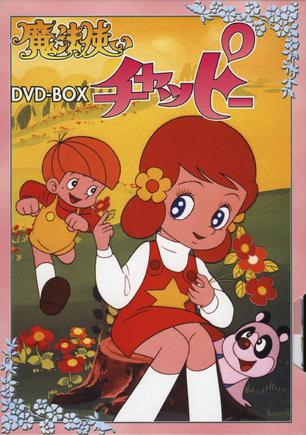 Mahou Tsukai Chappy is an early Magical Girl anime, aired in 1972 as the fifth installment in the Toei Animation / NET/TV Asahi "Majokko" (Witch Girl) pantheon. it's about Cute Witch Chappy who, becoming sick of the old customs of her people, leaves the Land of Magic for the human world with her little brother Jun and their pet Don-chan. Soon her family sees how much fun she has in the other realm that they decide to join her in her new home, facing normal life as much as they can without exposing their secrets. Essentially, it's a respray of Sally the Witch with a few tweaks.

Chappy is known for being the first witch to use a Magic Wand (actually a magical baton, given to her by her grandfather).note Her predecessor, Sally, used a wand during the opening sequence of her series, but not during the show itself. Her special chant is "Abura Mahariku Maharita Kabura". Chappy's closest human friends are tomboy Michiko and girly-girl Shizuko, much like her predecessor Sally's friends Yotchan and Sumire.