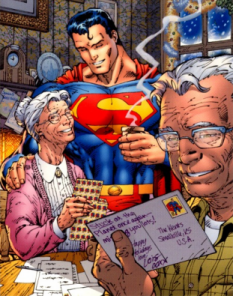 Do not underestimate the little old couple. They're the reason he's The Cape rather than an Evil Overlord.
Jonathan Kent: You're the answer, son. The answer to "are we alone in the universe?" [...]
Clark: Can't I just keep pretending to be your son?
Jonathan: You are my son.
— Man of Steel
Advertisement:

The super-powered hero is raised by normal human foster parents, sometimes unaware of his true heritage until his abilities manifest. This can be used as an open plot device for a Luke, I Am Your Father later in the series. Though they might not get combat training or magic instruction while hidden, they usually find out Upbringing Makes the Hero.

This is a frequent trope in mythology. If the foster parents are not called the child's mother and father, they are frequently their aunt and/or uncle. This is a throwback to older times, where children whose parents died were often adopted by the parent's brother.

Don't expect them to live too long once they've served their purpose, and their "offspring" might not be terribly grief-stricken either. On other hand, if they are still around into the hero's adulthood and you are stupid enough to threaten them, it's not going to end well for you.

See Tell Me About My Father!, can be Happily Adopted. Contrast Muggle in Mage Custody, Raised by Orcs, Turn Out Like His Father and Raised by the Supernatural. See also Changeling Fantasy and Raised by Natives.