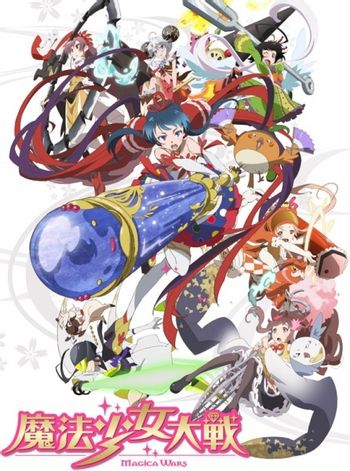 The dragon sleeps under the ground of this land… It gives an abundant harvest on the land when sleeping, but brings a disaster when it is awake. In every decade or hundreds of years, the dragon moves its body as if it tosses about unconsciously. The movement becomes the distortion and causes impurity. This “impurity” lavishes an evil on people. And now, there is a huge indication of a distortion. Gods foresaw the greatest harm would happen to Japan, divide own power and give it off as a messenger of God (御先神, Shinshi) in Japan to gather mediums, or “Magica” who can expel the “impurity”. With the magical weapon the power of Gods, the "Magica" will fight to stop evils in Japan.

Mahou Shoujo Taisen (魔法少女大戦, lit. "Magical Girl Wars"), a.k.a. Magica Wars, is a media franchise created by the internet television variety show 2.5 Jigen Terebi. It consists of three video games, and an anime television series by Studio Gainax starting in the Spring 2014 Anime season. The franchise's aim is to represent all 47 prefectures of Japan by way of magical girls. The character design would be picked from a Pixiv-based contest, and then will be voiced by a seiyuu native to the region.

Not related to any other franchise featuring either Mahou Shoujo or Taisen in the name (Such as Mahou Shoujo Madoka Magica or Sakura Taisen). And also this is not a Magical Girl version of the Super Robot Wars franchise.