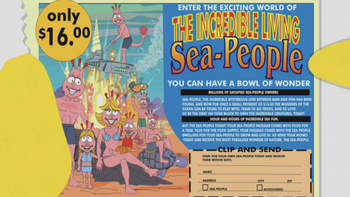 Letting kids down one generation at a time.
"Check this out. "Aqua Primates". A-Primes, Ferb. The back of the box shows them crowning the queen, fighting robots, and designing websites. Ferb, we've totally got to get this!"
— Phineas, Phineas and Ferb, "Phineas and Ferb Hawaiian Vacation"
Advertisement:

Sea monkeys are a hybrid breed of brine shrimp called Artemia NYOS, invented in 1957 by Harold Von Braunhut. These brine shrimp were marked as "instant life," and were sold using illustrations of anthropomorphic shrimp doing various human-like activities, although they rarely do anything on their own. The product was heavily marketed in the 1960s and 70s, especially in comic books, and remains a presence in popular culture. This is a link

◊ to the real life original ad for sea monkeys. This trope is about all of the fictional sea monkey-like brands that show up in media.

Common traits of these expies include:

Sub-trope of Bland-Name Product. See also Free Prize at the Bottom and Competition Coupon Madness, which might be where the sea monkeys came from.

Cartman has a dream about how awesome the sea people will be when he gets them in the mail.

Cartman has a dream about how awesome the sea people will be when he gets them in the mail.