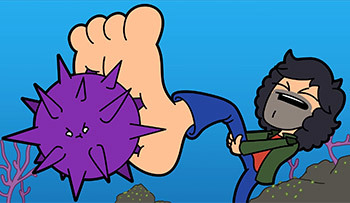 Take a look at an urchin. Those little critters are balls of spines that seem to do nothing but stay in place, just waiting to be stepped on and deal the hurt to anyone touching them. For extra injuries, urchin spines are actually quite brittle and tend to break when stepped on, remaining embedded in the swimmer's skin. And some of them are even poisonous! In other words, they are the living embodiment of the Spikes of Doom — painful, dangerous and, well, spiky.

As such, when an accident-prone character takes a vacation to the beach, expect them to inadvertantly walk on one, cue the Agony of the Feet.

They are also quite common as underwater obstacles in Under the Sea settings, usually as immobile versions of the Painful Pointy Pufferfish. Standing motionless on the walls, they are quite effective at complicating the navigation during a level, made worse by the fact that their spikes shield them from most of the dangers, making them quite the dangerous creature.

In visual media such as cartoons or video games, it's not uncommon for sea urchins to be visually simplified into near-perfect spheres with faces and a studding of large, conical spikes, going from being regular if spiky animals to more or less living caltrops.

A Sub-Trope of Spikes of Doom. Compare Painful Pointy Pufferfish, which is used in a similar fashion. See also Clingy Aquatic Life.

SpongeBob gets an itchy feeling thanks to some poison sea urchins at Jellyfish Fields.

SpongeBob gets an itchy feeling thanks to some poison sea urchins at Jellyfish Fields.