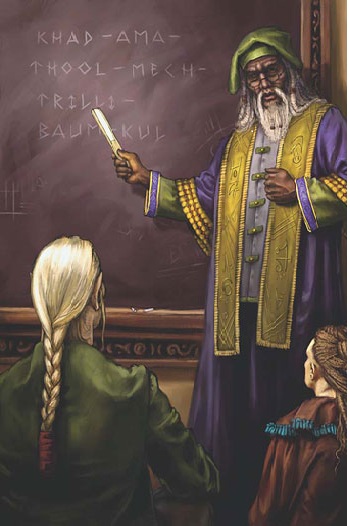 Now remember, children, with true names comes true responsibility.
"[The wizard] jumped down, and started waving his arms around while he went to speaking and squealing in one of those languages wizards use so the rest of us will think there is something terribly strange and mystical about what they do, kind of like lawyers."
— Murgen, The Black Company
Advertisement:

A version of Functional Magic where spells are cast by speaking in a particular language. This tongue typically works by possessing a quality or metaphysical importance everyday communication doesn't. In some cases it's the setting's Primordial Tongue, or the language of the gods, or the metaphysical equivalent of the universe's programming language, or anything else of this sort. It may also consist of the true names of every thing and action in the universe, allowing it control the things it names or cause effects by speaking them into existence.

Black Magic is often paired with Black Speech, White Magic is often in Angel song. In works set on Earth, the language may be a real-but-now-dead one, such as Latin. The words are often written in the Old Norse runic alphabet

; Hermetic Magic can use a number of real-life occult alphabets, such as Enochian or Paracelsus' Alphabet of the Magi, instead.

Latin Is Magic, Words Can Break My Bones, Runic Magic and I Know Your True Name are subtropes. May be the backbone of a Magical Incantation. If consistently SUNG to make it magic, that's Magic Music. Works using this trope will often discuss The Power of Language itself.

Words Can Break My Bones examples: