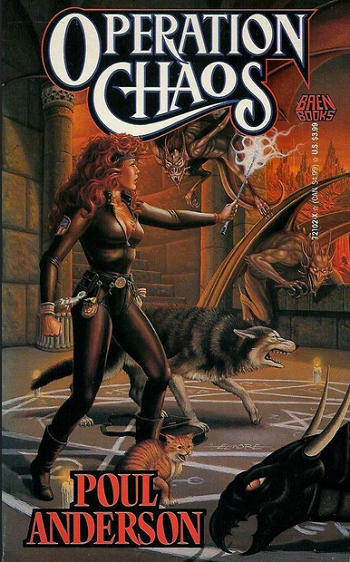 Operation Chaos is an Alternate History Magitek novel by Poul Anderson. It takes place in a world where technology never advanced past a primitive combustion engine, so instead magic takes its place in all things in an otherwise modern (for the time the book was written) setting. Cars and trucks are replaced by flying brooms and carpets, crystal balls act as televisions, radios, and telephones, were-creatures use flashbulbs created by the Polaroid corporation to transform at any time instead of just by the light of the moon, and Ivy League colleges have courses in witchcraft.
Advertisement:

The narrator (a werewolf) recounts a series of tales (originally four separate short stories) involving various paranormal adventures, from World War II (which took place against an Arab Caliphate that invaded the United States) through the Sixties, culminating in one that links them all together.

There is a sequel, Operation Luna, concerning the alternate history's first manned expedition to the moon. A character from this series also makes a cameo in Anderson's A Midsummer Tempest, in the chapters set in the Inn Between the Worlds.