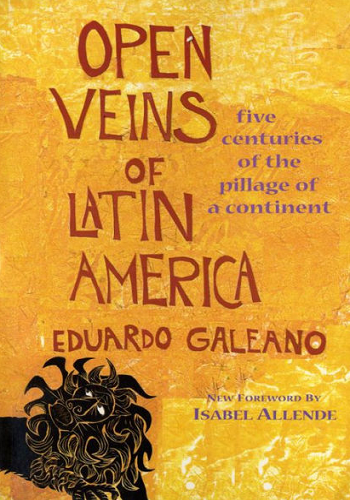 Open Veins of Latin America: Five Centuries of the Pillage of a Continent (Spanish title: Las venas abiertas de América Latina) is an essay book written by Uruguayan journalist Eduardo Galeano. It’s divided in two parts and it basically analyses how Latin America has been used by the world powers since the arrival of the early Europeans.

The first part deals specifically with the arrival of Columbus and the Europeans and the resources’ exploitations. The second part chronicles Latin American history and the most recent external interventions.

Notably, the book received a sales boost when Venezuelan President Hugo Chávez gave a copy of the book to Barack Obama. A later edition had also received a foreword from Isabel Allende, the daughter of Chilian president who had famously died in a military coup that ushered in Pinochet's dictatorship.