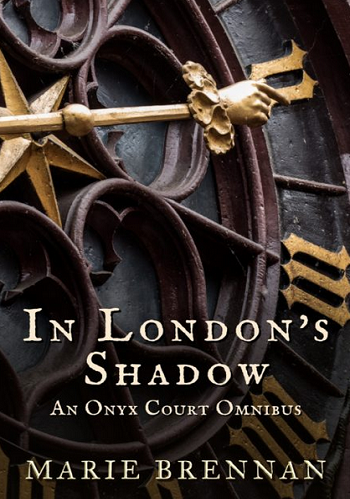 The Onyx Court series is a set of four Historical Fantasy novels (plus one novella and a few short stories) by Marie Brennan. The stories surround the inhabitants of the underground faerie palace, the Onyx Hall, that exists secretly under the city of London, and span about 300 years of English history, from Queen Elizabeth I to the late Victorian period. Each book focuses on a different time period and features two protagonists, one mortal and one fae (except for In Ashes Lie, which takes place over a long enough time span that two mortals are needed to cover everything). The books are meticulously researched for historical accuracy.

The Onyx Court series consists of the following novels:

The one novella, Deeds of Men, bridges Midnight and Ashes, and details Deven's efforts to solve a murder and ensure that his position in the Onyx Court is filled upon his death.

The author considers the books to be "semi-standalone", meaning that the reader need not read them all in order to understand them; however, they follow the same continuity, and reading later books first will definitely spoil previous ones. Reading them in order will also likely enhance the reader's appreciation of certain aspects of the story.