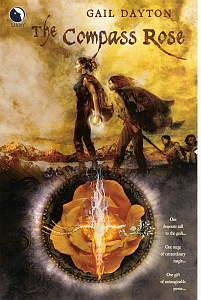 One desperate call to the gods...
One blast of extraordinary magic...
One gift of unimaginable power...
Advertisement:

A trilogy of fantasy books written by Gail Dayton that center around Naitan Captain Kallista Varyl. The books, The Compass Rose, The Barbed Rose, and The Eternal Rose are mostly set in Adara, a matriarchal country populated by both normal humans and naitani (Singular: naitan). In Adara, a family unit, called an ilian (Plural: iliani) is formed when a minimum or four and a maximum of twelve people in any combination or ratio of genders marry each other. Each person in an ilian is an ilias to the others (Plural: iliasti)

The first book, The Compass Rose, opens on Kallista and her bodyguard Torchay fighting a losing battle against invading forces. Kallista calls on The One in desperation and is, somewhat surprisingly for her, answered. Now, Kallista is a Godstruck naitan, the first to live in a thousand years.

Faced with learning to control this new form of magic, Kallista must also deal with Godstruck mates (by and large men she's never met before) appearing out of the woodwork. Kallista must travel with her new family into Tibre, the invading nation to confront a demon-possesed king.