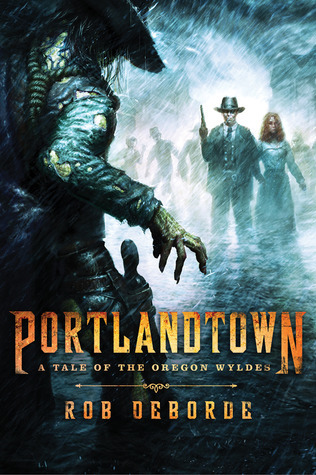 Portlandtown: A tale of the Oregon Wyldes is a Western horror novel with minor Steampunk elements by Rob DeBorde.

Joseph Wylde is a man with a past: once he ran with an outlaw called the Hanged Man, but now he runs a bookshop in Portland, Oregon, with his wife and their two children. His father in law, a U.S. Marshal, shot the Hanged Man dead in a final gunfight in Astoria 10 years ago. His body was burned along with his red-handled gun. The Marshal is retired now, and living quietly in Astoria. His daughter and son in law want him to move up to Portland and stay with them, but he insists that he belongs in Astoria.

One day, the Marshal is found digging up graves in the Astoria graveyard and can't remember why. Kate and Joseph insist on taking him to stay with them and the kids in Portland, and then the trouble starts. A young Astoria malcontent named Henry remembers seeing a grave dug where there shouldn't be one, and a famous red-handled gun thrown into it. He interests a band of petty outlaws in the Hanged Man's legendary weapon, and they go graverobbing themselves. The gun they find doesn't match the legends, but the corpse is remarkably well-preserved, and they decide to sell it to a circus as a curiosity. There is also a small black book, written in apparent nonsense, which Henry keeps for himself.

As Henry reads the book, he realizes that it contains great power, enough to make the dead walk again under his command. He is half right; the Hanged Man walks again, but he walks to his own will, which is revenge, and the mindless dead climb from their graves to follow him to Portlandtown, and unfinished business.