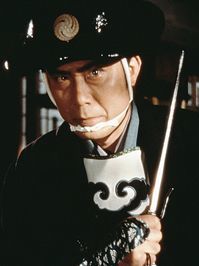 Heizo the Demon in the fleshnote  As played by Nakamura Kichiemon II
Advertisement:

Hasegawa Heizo is the head of the special police who had jurisdiction over arson-robberies in Edo, having succeeded his father in the position. He brought the hammer of justice hard on the criminal underbelly of the capital, and with time his name filled criminals with dread. Soon, a villain bestows upon him the nickname "Onihei" - Heizo the Demon. Contrary to the nickname, however, he was not a heartless man. He would give a hand to those who would be willing to repent for their crimes, many of with would later serve him as informants and aid Heizo in solving difficult crimes. He and his men would need it, for the bustling city of Edo never slept...

Onihei Hankachou is a series of detective/Jidaigeki novels by Shotarou Ikenami which started in the December 1967 issue of the light novel magazine "All Yomimono (ja)" published by Bungei Shunjuu. The series was adapted various times into TV programs, film and theater.

The anime adaptation provides examples of: