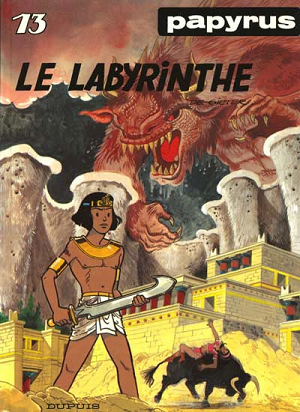 A subgenre of Historical Fiction, Historical Fantasy is similar to Urban Fantasy, except the setting will be a time and place in the past rather than modern times.

Historical fantasy novels will be set in an actually historic and geographic location on our own Earth. Although fantastic elements exist in the novel, these are implied not to have made it into the history books because of The Masquerade or else were dismissed as myth and superstition by more modern historians. Books of this type are typically Low Fantasy, since disguising the epic scope of High Fantasy to muggles in a real world setting would be very implausible.

Alternately, the world may be obviously meant to be a real, historical place, but names may have been slightly changed and fantastic elements added. This is a subjective area, so please only add examples where a very clear parallel can be drawn between the real and fantasy world.

There can be some overlap with Alternate History (particularly Alien Space Bats) if the fantastic elements are shown to have actually changed history as we know it. May overlap with Weird Historical War in stories set during historical conflicts. Essentially the inverse of Demythification, which is a genre that takes the supernatural elements out of an existing myth or legend. Gaslamp Fantasy and Medieval European Fantasy are subtropes.