Literature / Tunnel in the Sky 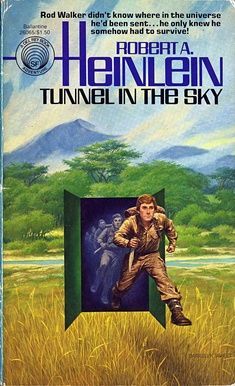 "Rod, everyone of us is beset by two things: a need to go home, and the impossibility of doing it."
—Deacon Matson
Advertisement:

Tunnel in the Sky is a 1955 juvenile Sci-Fi novel written by Robert A. Heinlein.

Rod Walker is a high school student taking an elective survival course, a requirement for anybody with ambitions in exploring other worlds. The final exam consists of being teleported to an alien world to survive there for up to a week and a half, a dangerous test but one expected to be overcome by the students. He prepares himself by following the advice of his famous survival teacher and his tough military sister, and takes only knives and light gear for the test (on the grounds that a gun would make him overconfident). Rod arrives on the planet and spends a few rough days wandering around, uncertain of what may be lurking around him, when he's jumped by another student and stripped of all his gear except for one knife concealed in a bandage.

Rod manages to survive as a savage, and assumes he missed the recall while out of his head with a fever, until he gets the jump on another student, Jack. After the hostile meeting and an awkward meal, they agree to team up together. And shortly after, Jack explains that their recall never came. Realizing that something has gone wrong, they decide they need to find other stranded students and band together to survive, possibly for the rest of their lives, on the unfamiliar world.