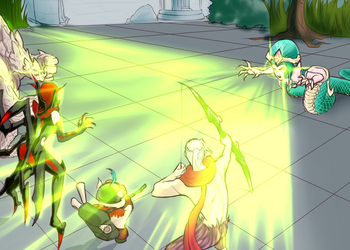 "The eyes are not the windows of the soul: they are the doors. Beware what may enter there."
— Doctor Who, "The Time of Angels"
Advertisement:

A lot of Brown Notes can literally kill or at least maim people simply by looking at them. Turning them to stone is another common effect. People may be warned against the danger of making eye contact with these beings, since often they must meet the creature's gaze for the power to work. Mirrors Reflect Everything may be a way of making the entity Hoist by His Own Petard.

Often works through some kind of magic; see No Eye in Magic for a more general application of this principle, and Eye Beams for a more weapon-like version. Not to be confused with Death Glare, which is only metaphorically related.