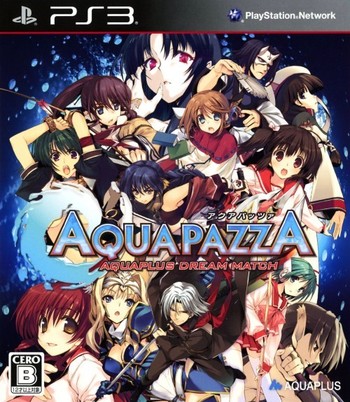 Aquapazza: Aquaplus Dream Match is a 2013 Fighting Game released for the arcades and PlayStation 3. The "Dream Match" refers to how all the entire cast hail from various Aquaplus titles. It's a Crossover between Utawarerumono, Tears to Tiara, and To Heart, along with a few characters from Kizuato, Routes, Comic Party, and White Album. When a mysterious mind control potion is concocted in an attempt to Take Over the World, everyone has to beat each other back to their senses and stop the Evil Plan before it's too late.

See also The Queen Of Heart, a series of fighting games featuring several characters from visual novels by Aquaplus (Known back then as Leaf), from which Aquapazza can be considered a Spiritual Successor.