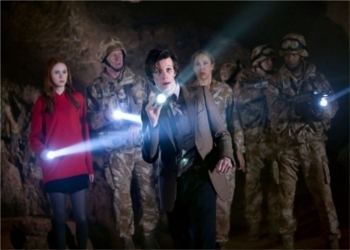 Doctor Who meets Aliens
"What if we had ideas that could think for themselves? What if, one day, our dreams no longer needed us? When these things occur and are held to be true, the time will be upon us: the time of Angels."
Advertisement:

The one where Moffat gives you more reasons to be afraid of statues.

In the 51st Century, Not-Yet-Professor River Song carves a message in Old High Gallifreyan onto the "home box" (like a black box) of a starliner, the Byzantium. 12,000 years later, the Doctor and Amy come across the message while the Doctor's "touring" a museum, "keeping score" by laughing at all the mistakes on the plaques and noting the bits he's been involved in. It says "Hello, sweetie". (Although Amy can't read the ancient Gallifreyan it's written in, which will be important later.) They run off with it, and after watching what's happening to River at this exact moment 12,000 years ago, they travel back just in time to catch River as she ejects herself from the starliner via the airlock after apparently doing what she does best - causing mass havoc! Before she leaves the ship, she offers those onboard a warning that there's something in the hold that will make sure the ship never reaches its destination.

To Amy's curiosity and the Doctor's slight resentment, River takes control of the TARDIS, having "had lessons from the very best". The Doctor was busy that day. The team follows the Byzantium to where it has landed — or, more accurately, crashed; guess River was right. Specifically, on top of an ancient, abandoned temple built on Alfava Metraxis. Not long after they've arrived, River is joined by a team of clerics, a military off-shoot of the Church led by a bishop, Father Octavian. They're hunting the creature that caused the ship to crash — a Weeping Angel. River has promised the Doctor's help in catching it, as it appears to have escaped into the "Maze of the Dead", the catacombs underneath the temple. Also, Amy quickly figures out that River has just got to be the Doctor's wife. The Doctor honestly doesn't know, and River delights in keeping the answer a secret.

As the clerics work on breaking into the temple, the Doctor and friends work on decoding the mystery of the Angels with a four-second clip of the Angel in the Byzantium. They also use an old book which, ominously, does not include any images of the Angels. The Doctor and River eventually realise that the book is trying to tell them that any image of the Angels essentially becomes an Angel, and is imbued with the qualities that make them so dangerous. Something that Amy is well ahead of them in discovering, having become trapped in the room with the recording of the Angel, which is gradually coming out of the screen towards her. Amy manages to defeat it by stopping the looped recording at the exact point where the image of the Angel is glitched out, but not before she looks into the Angel's eyes despite the Doctor's instructions. As the clerics manage to access the temple, Amy complains of something in her eye...

It just so happens that the catacombs are filled with statues, amongst which the Angel is hiding. The Doctor begins to explore, Octavian is cryptic, River has a dark secret and the clerics investigating the one clear exit from the catacombs are gradually picked off by the Weeping Angel (as in killed, even though the Angels only used to send their victims back in time). Also, Amy feels sand pouring out of her eye.

As the party investigates deeper into the temple, the Doctor and River realise something terrible which has been staring them in the face all this time — the Aplans were two-headed beings, whereas the statues in the Maze of the Dead are all humanoid. They're all Angels, emaciated and weakened from centuries underground. The radiation from the crashed ship is giving them strength and reviving them, exactly what the Angel on board had intended. The Doctor has unwittingly led everyone into danger.

At the same time, the voice of a dead cleric with whom the Doctor had previously connected appears on the radio to warn them; the Angels are hunting them down. As they escape, Amy's hand suddenly turns to stone, trapping her by holding on to something. Refusing to leave her despite her pleas, the Doctor tells Amy that it's just the Angel messing with her head... and convinces her by biting her hand. She's less than grateful.

Finding themselves directly under the hull of the Byzantium, the party's torches are failing as the Angels continue to draw power and grow stronger. The Angels appear over the radio to taunt the Doctor for failing them all, hoping to make him angry. Unfortunately for them, it seems to work — after asking everyone whether they trust him, the Doctor grabs a gun from Octavian and aims it at the gravity well, warning the Angels that they've made a mistake, because there's one thing that should never, ever be put in a trap:

Bang. The Doctor shoots the gravity globe. Cut to credits.

To be continued in "Flesh and Stone".

Example of:
Batman Grabs a Gun

Alternative Title(s): Doctor Who S 31 E 04 The Time Of Angels