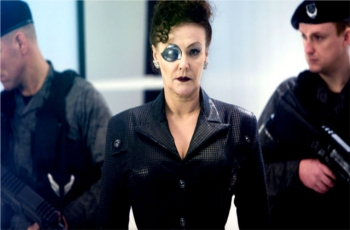 "Good men don't need rules. Today is not the day to find out why I have so many."
"This is the Doctor's darkest hour. He'll rise higher than ever before, then fall so much further. This is the day he finds out who I am."
— River Song
Advertisement:

The one with a ton of new characters as the plot demands.

Written by Steven Moffat. The finale of the first half of series 6.

Last episode, we found out that the Amy we've been seeing was not, in fact, Amy. It was an avatar, making her constantly believe that she was walking around unharmed, while her real self was held captive in a place called Demons Run. She's given birth there to a baby girl named Melody, guided by Madame Kovarian — the eyepatch lady — and surrounded by an entire military. But she's not scared. Because she knows that the baby's real father will come for them. A man who has travelled across the galaxy. A man who has lived for centuries. A man known as the... Last Centurion.

The soldiers are quite nice, actually, and simply believe that the Doctor is a fearsome warrior that should be killed. That doesn't mean they can't be his fanboys, too. One of them, Lorna Bucket (Christina Chong) from the Gamma Forest, met him once when she was young and only joined so she could see him again. She's happily embroidering a little piece of cloth with Amy's daughter's name in Lorna's native language, as a religious good luck charm for Amy.

The Eleventh Doctor and Rory (dressed magnificently in his Last Centurion gear) prepare to raise an army. On his quest, Rory infiltrates and defeats a Cyberman fleet without even a hint of fear. In her cell in Stormcage, River Song sadly acknowledges that the time has come at last. Today will mark the Battle of Demons Run and the Doctor's darkest hour. Both sides will make their sacrifices and River Song must finally reveal her most closely guarded secret to the Doctor: her identity. She sadly tells Rory that she can't come with him, not until the end.

The Doctor gathers friends with old debts in his TARDIS: a Silurian woman named Vastra from Victorian London, her human girlfriend, a martial Sontaran nurse whose clone batch met the Doctor once in his previous incarnation, Captain Avery and Toby, the Judoon of the Shadow Proclamation, Churchill's Dalek-modified space Spitfires, and Dorium Maldovar, the owner of the Maldovarium.

Lorna sneaks out, finds Amy and hands her the little embroidered cloth. Amy is too traumatised to talk to her much, but warms a little at the gesture, and at learning they both first met the Doctor as little girls and dreamed of seeing him again.

The Headless Monks, a religious faction, are seemingly allied with the army at Demons Run, but the Doctor interferes and starts manipulating the soldiers effortlessly. As Amy watches, he vows to rescue her. "Amelia Pond, get your coat!"

Rory, still in Centurion gear, reunites Amy and little Melody while crying Manly Tears. The Doctor follows soon after. He talks to young Melody for a bit ("I speak Baby. I speak everything.") and the two quickly bond. The Doctor gives Melody a little Gallifreyan cot. Amy asks him where the hell he got that from. Why would he have a cot? Does he have kids? Did he have kids? He mumbles a bit before revealing that all right, yes, it's his cot. From when he was a baby William Hartnell. And little Melody will be quite safe.

Chaos quickly ensues again, however, and the Doctor is questioned by everyone on whether or not he's responsible for the child. Because she's got Time Lord DNA. And there are not a whole lot of ways for little babies to become half Time Lord. Simply put, when a girl travelling with a Time Lord has a half-Time Lord baby, people tend to draw conclusions.

The Doctor is genuinely confused, because no, he very much did not sleep with Amy. And he can't see any way for the child to be part Time Lord, even when it's pointed out by Vastra that the Time Lords themselves evolved from continuously being close to the Time Vortex. That doesn't apply here, he states, because Time Lords evolved over billions of years, not just nine months. And even if this baby was somehow influenced by Amy being in the TARDIS, it's just not how evolution works. Besides, how could it even have been conceived on the TARDIS? Rory wasn't there, and then he was dead, and then he never existed and then he was a plastic Roman for two millennia, and then he was restored and it was their wedding n—

The Doctor realises quite suddenly why Amy was so worried about her baby being messed up by the time stream or having a "time head" or something. Little Melody was conceived on the TARDIS, and the TARDIS added quite a bit of her own creative influence to the baby's DNA; somehow, we have a genuine Human-Time Lord hybrid. And now this baby will be raised as a weapon against him.

The Doctor: Why would a Time Lord be a weapon?
Vastra: They've seen you.

Lorna approaches the Doctor's allies to warn them, she overheard the whole thing is a trap. As Amy takes the baby and hides while the Doctor's makeshift army defend them against the headless monks of Demons Run, who hadn't shown up on scans for lifeforms, the Doctor has a conversation with Madam Kovarian over a viewscreen, which she concludes by boasting about fooling him twice the same way. The Doctor rushes to reach Amy and break the news to her first, but Kovarian has already cut the connection between the baby and the ganger baby Amy is cradling, causing her to explode into goo.

Strax and Lorna lie mortally wounded. The Doctor rushes to Lorna's side and tells her to be brave. Of course he remembers her. They ran, years ago. She dies in his arms. He quietly asks Madame Vastra who she was, she does not know either, but says that Lorna was very brave.

By now, the Doctor has got into a habit of hugging Amy tightly, and rubbing her back, while he's talking to her. With permission from Rory, of course. Because he can only give her one nasty revelation after another: namely, that Kovarian was one step ahead of everybody, and her real baby is far, far away by now.

And then, after all the action is over and the child lost, River appears. And the Doctor is very genuinely angry with her. He's beyond Tranquil Fury and gone off into plain old rage. Why did she wait this long to show up? Why did she do nothing to prevent all this? Why is she just standing there? This carnage, this drama, this isn't him. River quietly replies that he's wrong. This is him. Gathering people around him, changing their lives, making them sacrifice themselves for him. As for the Demons Run army: in the Gamma Forest language, "Doctor" has become the word for "Mighty Warrior". The Doctor's reputation has made him into a demon in the eyes of entire cultures. He's a true Memetic Badass, and they've become so scared of him, they're going to kill him for good out of sheer terror.

He orders her to stop lying to him and to finally explain who she is. She takes his hands and leads him towards the cot. He looks down at his old cot, at the Gallifreyan text, at his little kinetic baby toy mobile. He looks up at River. He looks down again. And he starts to happily make incoherent Squee noises while she grins and nods at him.

It's all still a bit confusing to him — they've kissed and everything, and that's just weird now — but he's too busy being flabbergasted to even care any more. He waves goodbye to the Ponds, promises to find little Melody, gets in the TARDIS and gives River one final Squee before dashing off. River can take the others home.

Amy has a full-on Heroic BSoD at that. She picks up a gun and prepares to shoot River right then and there if she doesn't explain now. River calms her down with some effort, and tells her to take another look at the Doctor's cot. Because with written text, the TARDIS translation matrix can take a while to kick in. No, not the Gallifreyan text on the cot — the TARDIS doesn't translate Gallifreyan anyway. River means Lorna's beautifully embroidered cloth, and she shows it to Amy and Rory. The only water in the forest is the river. In Lorna's Gamma Forest language, the elaborate embroidered text says "Pond" on one side, and "Melody" on the other: "River" and "Song". Mummy and Daddy, meet your daughter.

THE DOCTOR WILL RETURN IN
LET'S KILL HITLER
AUTUMN 2011