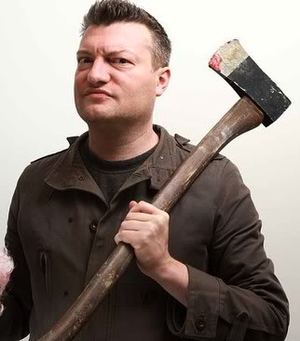 "Whenever I tell people I'm a misanthrope they react as though that's a bad thing, the idiots. I live in London, for God's sake. Have you walked down Oxford Street recently? Misanthropy's the only thing that gets you through it. It's not a personality flaw, it's a skill."
"I don't have a heart. I have an unbeating onyx cricket ball. And stone-cold marble eyes. And a brain woven from tangled wisps of cynicism. I'm a miserable robot. Pity me."
Advertisement:

Charlie Brooker (born 3 March 1971) is a "writer, producer, and self-indulgent cry-baby", according to his book The Hell of It All. In less self-flagellating terms, he's a British comedian, columnist, writer and host of several television shows.

One of the best (relatively) new faces on British television and a well-known example of a Caustic Critic, Brooker started his working life while still in school, as an occasional cartoonist and writer for the subversive '80s children's comic Oink!. After a failed media studies degree (apparently video games were yet to be considered a medium), he became a reviewer for the gaming magazine PC Zone. In 2000, he began writing a column called Screen Burn for The Guardian, which went on until October 2010, when he announced its discontinuation. He had been noticed by the newspaper after his satirical site TV Go Home became popular, and became a regular columnist in its magazine supplement (the G2) and its weekend editions. These columns are collected in (to date) four books: Screen Burn (2004), Dawn of the Dumb (2007), The Hell Of It All (2009), and I Can Make You Hatenote Named so because the cover was a parody of Paul McKenna's I Can Make You Thin - Brooker later said he regretted not calling it Fifty Shades Of Rage (2012).

He achieved brief notoriety for a Screen Burn column that went viral in the USA via The Guardian's website which was based on coverage of a presidential election in which George W. Bush was a candidate. Brooker concluded his piece with a whimsical line jokingly recommending that Americans read about the Guy Fawkes solution to an oppressive Parliament, and take notes for possible emulation if Shrub got to be President. Many Americans unfamiliar with British black humour took it as an incitement to blow up or assassinate the President-elect, and Brooker became the most hated man on the Internet that week; he was even reported to the FBI as a possible presidential assassin. The Guardian was forced to apologize to its American readers and Brooker, deluged in death threats from excitable members of the American right, was genuinely alarmed at the odium he inspired; however, he notes he was never interviewed by the FBI and has had no difficulty whatsoever in visiting the USA on many occasions since.

His best-known work to date is probably his television writing: he wrote on The Eleven O'Clock Show, and was one of the writers on Chris Morris's controversial Brass Eye episode about paedophilia. Brooker also co-wrote Nathan Barley with Chris Morris in 2006 after creating the character on TV Go Home in the late 90s.

In 2006, Brooker began a television program on BBC4 called Screenwipe (and later a spin-off focused on news reporting called Newswipe, as well as a video game-based Poorly-Disguised Pilot special called Gameswipe), which largely skewers bad television programmes while deconstructing the process which delivers them to the screen — including commissioning, production, industry regulation, channel guidelines for formatting and content and the history of certain forms of television programmes. The programme also often deconstructs specific TV-related scandals and events, often exposing the sour underbelly of the television industry. His hostile manner as host was one of the chief influences for Yahtzee's Zero Punctuation review style. Brooker even mentioned on his Twitter once that he wanted to get Yahtzee on Gameswipe, but it didn't work out for various reasons.

In 2009, Brooker created a panel show called You Have Been Watching, in which he discussed television with a rotating set of celebrity guests. The show was picked up by Channel 4, with guests including David Mitchell and Frankie Boyle.

Although initially best known in the UK for his comedy, he took a departure from that in 2008 to write the BAFTA-nominated Dead Set, a five-part zombie series set in the Big Brother house. He's also the writer and creator behind the award-winning Black Mirror series, an anthology series of dark science-fiction dramas about modern technology.

He is now Mr. Konnie Huq (of Blue Peter fame). A reference to Ugly Guy, Hot Wife on this page was previously edited out because it was too subjective, but any familiarity with his Screen Burn columns tells you that he'd probably be the first to agree. ("Physically, Brooker resembles a cross between a white Laurence Fishburne, a paedophile walrus and a scowling pork knuckle," according to the biography in his books.) However, given her children's TV persona, having become famous on Blue Peter, they would appear to be a real-life Odd Couple. They have two children.

He really dislikes credit squeezing and bumper graphics, particularly if they run over the end of Doctor Who.

Devo, is right about everything

One time, he refused to collect his girlfriend from a train station in the middle of the night because there was a spider by his front door.

He claims it was big. Yes, he has a paralysing fear of house spiders so much that he left his girlfriend walk home alone in the dark.

Stuff that Charlie Brooker has been involved in:

Well, that's all we have to say about Charlie Brooker. Thank you for reading. Now Go Away.

Charlie Brooker's retrospective of the year ends on the positive twist ending that 2016 itself was just a bad dream.

My desk is a piano

Charlie Brooker's retrospective of the year ends on the positive twist ending that 2016 itself was just a bad dream.

My desk is a piano