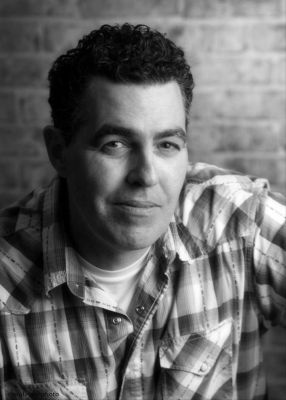 Get it on.
Advertisement:

Adam Carolla is an American actor/comedian/radio host/podcaster and former carpenter and amateur boxer from Los Angeles. Known for his "guy" humor, complaining about the downfall of society through minor aggravations (don't mention passion fruit to him...just don't), and his incredible ability to riff and improvise, he is probably most famous for The Man Show and Love Line, and now for having the most downloaded podcast in the world.

Growing up poor in North Hollywood, Adam worked a string of low paying construction and carpentry jobs while honing his comedic skills in the LA comedy improv troupe The Groundlings and open mics around LA. He got his big break after befriending Jimmy Kimmel when Jimmy worked at the radio station KROQ, and needed a boxing instructor for a bit he was going to do on The Kevin and Bean Show - "The Bleeda in Receda," a boxing match between Jimmy and Michael the Maintenance Man.

Adam ended up a regular on Kevin and Bean, mostly doing a character called Mr. Birchum, a high school wood shop teacher. He and Kimmel became a comedy writing team, and they would go on to co-create and host The Man Show (as well as Crank Yankers, both on Comedy Central). He additionally became the co-host of Love Line along with Dr. Drew Pinsky, probably the most famous one in the show's run.

After Howard Stern left terrestrial radio, he hosted a morning radio show (one of many created to fill the void) for nearly four years before getting let go; he then moved his show to the podcast format, where The Adam Carolla Show became the most downloaded podcast of all time.

Along with his podcast, he was the host of the Spike TV show Catch a Contractor. In 2015, he released his second movie Road Hard (his previous movie was The Hammer), a documentary about Paul Newman's racing career called Winning, and his sixth book Daddy Stop Talking came out in May of that same year.

He is married with two kids and still lives in the LA area.

For a list of tropes associated with Adam, see The Adam Carolla Show.

Was for a time considered as a host for Top Gear (US), which doubtless would've led to a Hurricane of Puns about his name being homophonous with one of the most Boring, but Practical cars there is.

Adam has appeared in the following media: