Radio / So Wrong It's Right 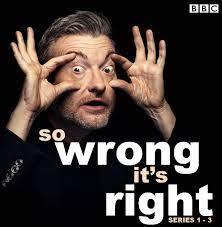 So Wrong It's Right is a BBC Radio 4 comedy panel show hosted by Charlie Brooker. It bills itself as a celebration of failure where panellists are rewarded for providing objectionable, embarrassing, morally appalling - in a word, wrong - suggestions and anecdotes. Three series were broadcast in 2010, 2011 and 2012.

So Wrong It's Right provides examples of: