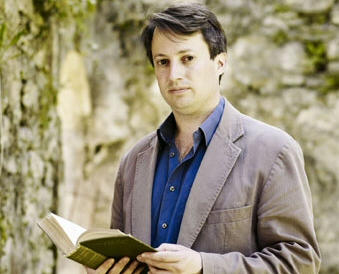 David James Stuart Mitchell (born 14 July 1974) is a British actor, comedian, and writer (though not the same as the novelist of the same name) best known for his work with long-time comedy partner; Robert Webb, particularly on the "Mitchell and Webb" line of sketch shows; That Mitchell and Webb Situation, That Mitchell and Webb Sound, and That Mitchell and Webb Look. The pair also star in a Black Comedy / Cringe Comedy Brit Com, Peep Show, with Mitchell playing Mark, an uptight, socially-repressed sad sack, to Webb's Jeremy, an aspiring musician with delusions of adequacy. He and Webb were also the dominant writers in short-lived sketch show Bruiser. The two also appeared in the feature film Magicians, written by the same writers as Peep Show and casting the pair as a magician double-act bearing similarities to their characters in the show. They have also appeared together in Ambassadors and BACK

In his own projects, Mitchell is the king of the Panel Show, with numerous recurring appearances on QI, Have I Got News for You, Mock the Week and Would I Lie to You?, the last of which he is a team captain; he also turns up on The News Quiz and I'm Sorry I Haven't a Clue now and again. He is host of the radio show The Unbelievable Truth, which requires panellists to discern true facts from false. In 2013 he began hosting a new quotation-based panel show called Was It Something I Said?, and was also one of the hosts of the news/comedy show 10 O'Clock Live.

Mitchell's comedic style is characterized by witty, intelligent barbed commentary on the illogical nature of the world, which almost inevitably erupts in a ranting monologue which has the audience (and often the target) in stitches. He is the most likely spiritual successor to Stephen Fry, though he would be the first to deny it. Mitchell often seems self-conscious about his own success, presenting an occasionally shy face to the world at odds with his rapid-fire delivery when frustrated or annoyed, as when he claimed he would have liked to succeed David Tennant as the Doctor on Doctor Who but doubted he would be attractive enoughnote Just look at that picture, though. It screams "the Doctor.".

He also made a web video series; David Mitchell's Soapbox on Youtube

, he has a column in The Observer

and has written an autobiography "Back Story". His current venture for the BBC is the sitcom Upstart Crow, part of their 'Shakespeare 400' season, in which he plays William Shakespeare trying to break into theatrical writing but who is woefully unappreciated by the prosaic Brummie-accented people he grew up with, who cannot understand his vision and think he's got too many big ideas in his head.

He is married to presenter Victoria Coren Mitchell, of Only Connect fame, and they have a child together.

As mentioned, he has no relation to the author David Mitchell, who wrote Cloud Atlas.

Tropes associated with Mitchell or his characters:

Mitchell and Webb takes this trope to its extreme: Shooting anyone who pronounces things wrong.

Mitchell and Webb takes this trope to its extreme: Shooting anyone who pronounces things wrong.