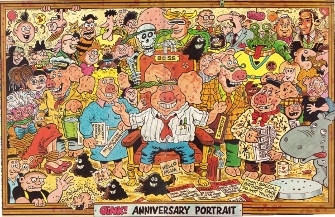 "Editor" Uncle Pigg surrounded by many of Oink!'s major (and not-so-major) characters.
Advertisement:

One of the more successful attempts to reinvigorate the British children's comic, Oink! ran from 1986 to 1988, with several specials afterward. Based in Manchester, it was an ebullient romp created specifically for slightly older readers and contrasted with the older, more stylistically conservative comics which dominated the UK market at the time: The Beano and The Dandy.

Oink! featured a regular set of strips with recurring characters, but also often did "theme" issues based around specific topics, such as music. In many ways it resembled Viz more than any contemporary comic: it generally featured more violence and gross-out humour than any of its' peers, as well as satire which probably went over the heads of many readers — they made fun of Morrissey in two separate issues, had a regular character (Mary Lighthouse) to poke fun at Moral Guardians and occasionally took jabs at politicians, but managed to stay relatively clean throughout its run.

Oink! had a spin-off video game and a single, which came free on flexi-disc with a particular issue.