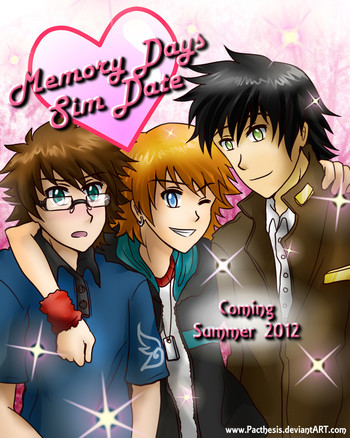 Memory Days Sim Date is an Animesque Dating Sim (with heavy elements of Visual Novel) by Pacthesis on deviantArt. It is a remake of two previous games, Anime Sim Date 2.0 and Anime Sim Date 2.5.
Advertisement:

Ai is your average girl, who lives in Reton with her constantly working parents. Her family owns a house in West Cigam, which they use for a summer home. During her stay there for one summer, she meets three boys who live in West Cigam: Haru Noru, Daichi Tomo, and Kai Utsugi. After her brief run-ins with them, she eventually has to return home.

A year later, her father gets a new job in West Cigam, and she and her family move into the summer home. She encounters Haru, Daichi, and Kai again, who remember her from last summer. Over the year, she has the opportunity to befriend and fall in love with one of them.