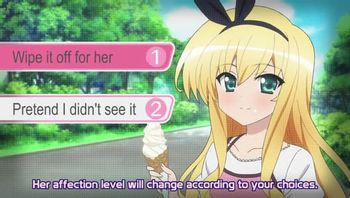 "Let's see; she's smiling, so option one should work — unless that throwaway line of dialogue back in Chapter 2 was hinting that she was actually a Tsundere and so I should choose number two...hold on while I check the FAQ."
Advertisement:

The Dating Sim is a type of game designed to set up goals, usually in the forms of schedules and stats corresponding to social skills, which must be achieved to discover a story focused entirely around the Character Development of the player's chosen girl/guy, get into his/her pants, or both. This leads to Multiple Endings, though some Dating Sims make it possible to see several of these "endings" in a single playthrough.

Some Sim Date games have been made into Harem anime, though the result is usually nothing special due to the removal of sex and the fact that the narrative can no longer focus on any single character.

Because there is almost no market for true Dating Sim games outside of Japan, it's a frequent misunderstanding among western gamers that "Dating Sim" is the general term for all ren'ai (romantic love) games. In fact, many romance games are Visual Novels, which is a much different game style. (See for example, the difference between the Ace Attorney series, which is very close to a Visual Novel style of gameplay, and the DOA Xtreme series, which is the closest thing to a true Dating Sim with mass-market appeal in the US.) If the game plays out like a Gamebook, that's a Visual Novel. If it feels like you're playing an RPG, trying to keep track of everyone's feelings about you and giving out presents, that's a Dating Sim.