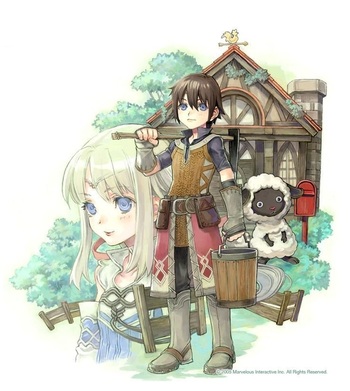 The first game in the Rune Factory series, released on the Nintendo DS. It was developed by Neverland Co and published by Marvelous AQL. The game was intended to be a single Spin-Off game that commemorated the 10th anniversary of the Story of Seasons series. It was later released in North America by Natsume on August 14, 2007. Rune Factory was a hit with gamers and critics, which resulted in Marvelous AQL deciding to continue the series independently from it's parent franchise.

The story begins with a young, amnesiac man named Raguna collapsing in front of a home on the outskirts of a village called Kardia. The homeowner named Mist finds Raguna and attempts to help him... by giving him a hoe and a watering can. Eventually, she does manage to actually help him and allows Raguna to live on an unused area of land nearby (with compensation).

Soon Raguna is producing crops for profit, slaying monsters, wooing the village ladies, and potentially stopping the Take Over the World plot of Ethelberd and his Sechs Empire next door.