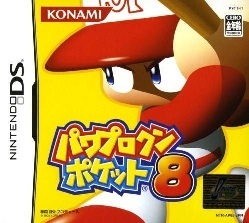 The One Where... you wonder "Do robots dream of electric Baseball"?
Advertisement:

Power Pro-kun Pocket 8 is a 2005 Baseball simulator + dating sim + Minesweeper developed by Pawapuro Productions, formerly Diamond Head, and published by Konami for the Nintendo DS. The Baseball simulator engine has been changed again, and features a Sprite/Polygon Mix with larger character sprites. Like in 3, the Inner Success is just a Minesweeper clone, but it does have a little storyline.

Cyborgs and Ridiculously Human Robots have become commonplace in the Pawapoke setting. To regulate them there is the secret CCR police organization, and they have sent a certain agent "Hero 8" to investigate the Oogami Hoppers Baseball team (formely Moles, from 2 and 5) which is suspected of hosting an illegal cyborg. But can he do it when he doesn't know the first thing about Baseball?

A direct sequel to Taisho Adventure Edition from Pawapoke 7. The detective protagonist goes on treasure hunts across minefields for his clients.
Advertisement: