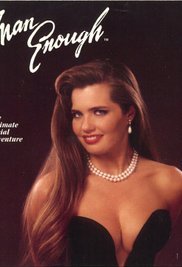 Man Enough is a visual novel released on DOS in 1994, developed and published by Tsunami Media. It's a Dating Sim in which you're a nameless man who has gotten a recommendation to a dating service called Man Enough by his friend. After arriving there, he meets a woman named Jeri and tries to seduce her. He fails, but she will date him if he dates all five of her friends: Quinn, Erin, Blair, Kellie and Fawn.

To play the game, you have to pick one of the women, and then try to pick one of the correct options. There are some one off breaks from the usual gameplay, though, like an impossible to beat paintball minigame, and a very serious final level.