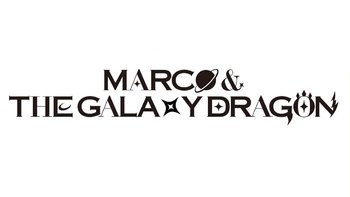 "Have you ever heard of the galaxy dragon?"
— Arco
Advertisement:

Marco & the Galaxy Dragon is a comedic Visual Novel developed by TOKYOTOON and published by ShiraVN and HOBIBOX. It was released on February 28 2020.

Young piano prodigy Maruko Onda rushes back to her dressing room after a successful recital, eager to celebrate with her mother. But when she arrives, she finds the room in shambles and a pair of strange clowns holding guns to her mother’s head. They’ve come to take Maruko away, and the last thing she remembers is one of them firing at her mother.

Ten years later, Marco—the galaxy’s greatest treasure-hunter—steals the legendary Lizard Stone from under the nose of El Skeleton, a minion of the evil Astaroth. But rather than bring the Stone to her boss, Dosgoro, she decides to sell it for herself. She heads to Earth, accompanied by Arco the shapeshifting Galaxy Dragon and their pet Emergency Rations.

Selling the Stone isn’t the only reason they’re going to Earth, however. Marco wants to seek out a new treasure: the identity of the mother she no longer remembers.