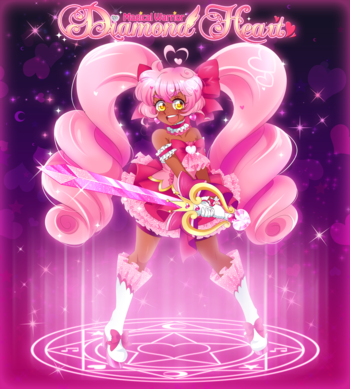 Our protagonist, Valerie, in her Diamond Heart form

Magical Warrior Diamond Heart, or MWDH for short, is an in progress Visual Novel created by Pyonkotchi. The demo, which has the first seven chapters, can be found here

The crystal Kingdom of Chalcedonia was once a beautiful place, under the rule of the Princess Rosalia, they lived happy peaceful lives. Until one day, monsters called Nightmares destroyed the kingdom. Princess Rosalia and her fairy knight Diana hid deep in the castle, praying that their last hope, the magical Rose Crystal Mirror would produce a miracle, and save their home, however, they were attacked by the leader of the Nightmare Agency, Druzy. Diana fought helplessly before finding herself transported to Earth, but her Princess was no where to be seen.

Unfortunately the nightmares began to attack this new world too. Valerie Amaranth, an ordinary 17 year old, has her world changed forever when she recieves the powers of the Legendary Crystal Warrior Diamond Heart. Now with the help of Diana, she must find her allies, defeat the Nightmares, and rescue the missing princess Rosalia.

and the tumblr page, where progress (and fanwork!) is constantly posted, is here.

, with all of the goals unlocked.