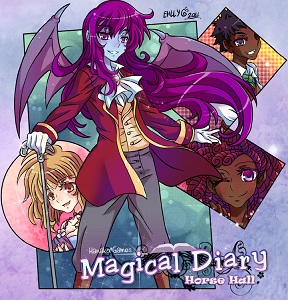 Magical Diary is a Ren'Py-based Romance Game series with Life Sim and Adventure Game elements, released by Hanako Games in 2011.

In the first game, Magical Diary: Horse Hall, the Player Character was an ordinary teenage girl until she discovered her inborn capacity for magic and was given The Choice: deny her power and keep her normal life, or embrace it and enroll at the Wizarding School Iris Academy to learn how to control and use her magic. The game follows her through her first year at Iris Academy and her introduction into the world of magic - and all of the dangers that come with it.

A Wolf Hall spin-off was released in 2020. It is set in an Alternate Continuity to the original Horse Hall, where the general setting and characters are the same but Schrödinger's Player Character creates numerous ripples causing events to unfold differently. In Wolf Hall, the Player Character is the heir to a powerful noble bloodline masquerading as an ordinary Foreign Exchange Student, wanting to experience what life is like without relying on his family name.

Both versions of Magical Diary contain the following tropes: