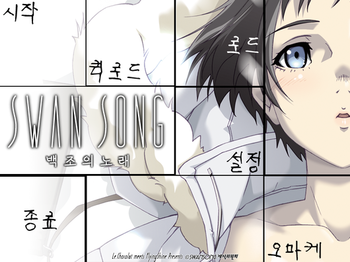 An Utsuge Visual Novel by Flying Shine that focuses on the lives of six characters after surviving a massive earthquake. It was originally released in 2005, but wasn't translated into English until 2010. The story focuses on the group's struggle to survive in a world where law is no more and nothing is promised. To make matters worse, the earthquake happened on Christmas during a heavy snowstorm, which is not relenting no matter how long the group waits. Access to the outside world is cut off, and no signs of help are noticed, despite the quake being too large for a country to just ignore. Even after the group manages to successfully secure a stable life with other survivors in spite of the quake and endless snow and cold, many problems and complications arise.
Advertisement:

The six characters of the original group are:

Warning! Due to the nature of the game, the trope page may contain many SPOILERS even after following our usual spoiler policy. If you are the type of reader who is bothered by them, probably you shouldn't look at this page at all before reading the game.