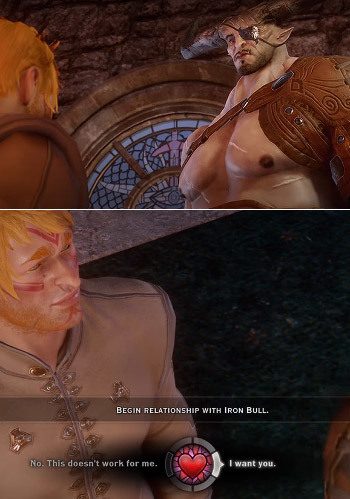 When a video game—usually a dedicated Romance Game, RPGs, or Wide-Open Sandbox—allows the player to pursue a love interest of the same gender alongside a bevy of heterosexual options.

This trope has increased in prevelence since the late 2000's due to increased visibility of queer people. And as an interactive medium, it's possible for a game to include such content while giving those uninterested in same-sex romance the option of skipping it. This means that games that include romance have increasingly allowed the protagonist the option to romance a few characters of the same gender.

When the story is built around the romance as opposed to the romance being a sidequest, then it overlaps with Queer Romance. For Japanese games where being gay is not just an option but the game itself is themed on it, see the video game sections of Yuri Genre (for lesbians) and Yaoi Genre (for gay males). This may or may not overlap with Optional Sexual Encounter, since a game won't always go that far.

Games and series offering both