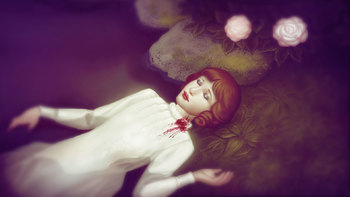 Alas, in restless sleep you lie / With dying breath and dusty cry. / As you lie now, so once did we / Prepare to rise and follow me. (Early Imperial Burial Curse)

Tetrine Reish is a librarian -all right, librarian’s assistant- who lives in the city-state of Asher. In spite of her leading a seemingly normal life, things start to take an ominous turn when she begins to dream of strange hallways and receives the visit of a mysterious woman asking for a book. A book that doesn’t belong to Tetrine’s library, and is written in Nell marks, the language of demons. Tetrine is one of the few people who can actually read them, but her secret is threatened when two suspicious individuals figure it out. A kidnapping and an attempted murder (or two) ensue, and Tetrine’s life will never quite be the same again.

Asher is a free dark fantasy visual novel first released by Sun Labyrinth in 2014, and newly reissued with brand new art and double the word count on itch.io

in 2018. It features 9 different endings and an (almost) entirely black-and-white retro aesthetic, and takes place in a world reminiscent of the 1920s, only populated by mythical creatures. The player can influence Tetrine’s personality to a degree but the main decisions have life or death consequences for her.

Asher is the first opus in a trilogy of visual novels following the same group of characters, which include Tell a Demon (2017), available on Steam

as well as on itch.io

, and The Empress of Aeser, which is still in development as of late 2018.

Tell a Demon tells three intertwining stories set in the city-state of Asher. Your choices affect the outcome, with several endings for each character. Take on the role of a human girl in a supernatural city, an immortal demoness with a mission (and possibly a vendetta), and an undead fellow who wouldn't mind having his life back, thank you very much.

These visual novels provide examples of: