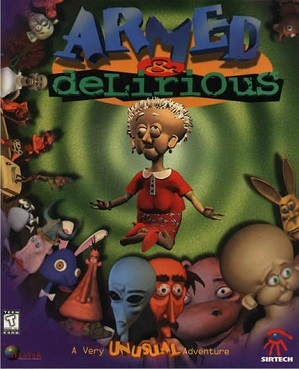 Armed & Delirious was a 1997 adventure/puzzle game developed by Makh Shevet Games and published by Sir-Tech, in which crotchety Granny Crotony goes looking for her family after her greedy son makes a deal with a rabbit in a suit, which results in the family home being pulled into outer space.

This game is profoundly surreal, runs on a constant stream of nonsensical moon logic in setting and mechanics, and checks pretty much every box on the list of 90s adventure game sins, even inventing a few of its own. The most infamous example is a puzzle with 512 possible solutions that is only solvable by trying all of them until you find the right one, as there is no clue in the game whatsoever as to what it is, and the solution changes every time you play it. Other puzzles include things like putting bullets in mushrooms to best a giant, opening the sun like a door, and convincing a plant secret agent that you exist.

Ross's Game Dungeon did a 2-part

on it, trying its best to condense the original game's 5 CD's into a 50 minutes overview.