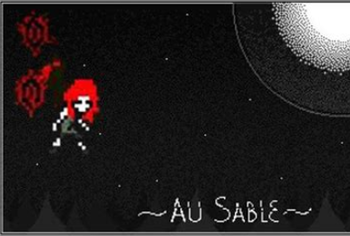 "Nearer my God to thee."
Advertisement:

Au Sable is a freeware Survival Horror game by Amon 26 released in March of 2009.

The game puts the player in the role of a strange, red-headed, unnamed girl who is looking for another girl named Harmonia (possibly her sister), who went missing in an abandoned town surrounded by a sinister forest. But something very evil is living in these woods, and our heroine soon finds herself up against a dangerous cult and demonic entities. You can download the fixed version here

See also All of Our Friends Are Dead and Gyossait, surreal action-platformers by the same creator. A First-Person Shooter prequel to this game, The Hunt, was also created by Amon 26.