Music / Tones And I 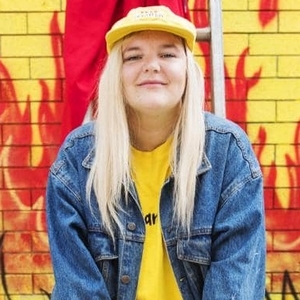 "Oh my God, I've seen the way you shine ...
Advertisement:

Not since Sia has the world encountered a rising Aussie pop star with a distinctive voice.

Indie Pop Singer-Songwriter Toni Watson was born around 1993 (some outlets list her as being born in August 2000 which not only is not true, but outright impossible given the timeline of events) in Mornington Peninsula, Victoria, Australia. Although she grew up in a fairly affluent area, she took various jobs doing retail in her teens and early twenties to pay her way forward in the music industry. She started busking in Melbourne before moving to Byron Bay, NSW in 2017 to break into the local scene. It was there she met Jackson Walkden-Brown, who would become her manager, and Konstantin Kersting, who would become her Record Producer.

In early 2019, she was signed to Bad Batch Records and released her first single, "Johnny Run Away", via Triple J Unearthed. While it was well-received, going into the ARIA Top 20, nothing could compare to her next single ...

In May 2019, Tones released "Dance Monkey", a song detailing her dissatisfaction with rowdy crowds heckling her as she was busking in Byron that she wrote in a dark closet within half an hour. The song reached number one in 30 countries and since then has been almost inescapable. It ended up being the Grand Prize winner of the 2019 International Songwriting Competition and has also appeared on all manner of international media, including Batwoman, The Tonight Show Starring Jimmy Fallon and the tinny speakers at your local shopping mall.