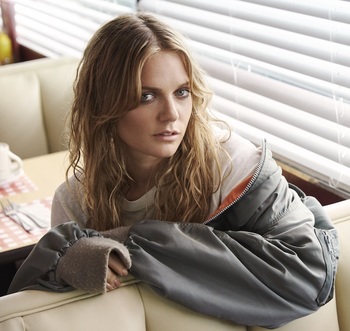 Don't worry. She's a cool girl.
All the girls stare at me, drop lip,
Drippin' in harmony, like fifth.
— "bitches"
Advertisement:

Tove Lo (born Ebba Tove Elsa Nilsson on October 29, 1987) is a Swedish singer whose musical style can be best described as what would happen if Paula Cole was an electropop artist. She gained fame in August 2014 when her song "Habits (Stay High)", previously featured on her debut EP Truth Serum, became a hit on radio. Her debut album, Queen of the Clouds, was released on September 30, 2014.

Tove's next two albums formed two halves of a concept: Lady Wood came out in 2016, along with two short films to promote it: Fairy Dust and Fire Fade. Shortly after the release of the latter in 2017, Blue Lips was released, with its own short film premiering in 2018. Tove focused then on collaborations up until the following year when Sunshine Kitty sees her lightening up a bit.

Tropes applying to the films in general include: