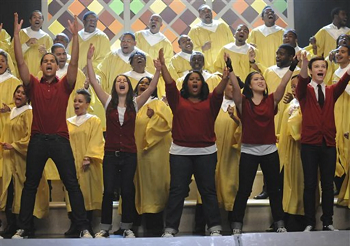 "It's like a dream... Let the choir sing!"
Advertisement:

A gospel choir is brought in, and while their music may certainly be About Itself, their appearance ultimately serves the the purpose of creating a moment that is just real, just transformative, just significant, just... better.

The character(s) of interest may be among either the performers or the spectators. It may even be an elaborate dream or fantasy sequence that a character has imagined.

It may underscore that the main character, perhaps The Grinch, HAS CHANGED. It may be used to highlight a moment of epiphany for a character who has perhaps until now lacked a sense of purpose or direction. If it is a fantasy sequence, that character might be imagining themselves as better, more centered and more true-to-self. It may stand to prove to the world that, YES, the lead singer, often a Cool Loser, you see in front of you, must Finally Be Noticed and/or must Finally be Taken Seriously. The audience, which may be made up of a bunch of sullen kids who think that School Is for Losers, experience a Genuine Moment Of Realness.

At any rate, it narratively underscores an Important Moment, and perhaps even aims to be a Water Cooler Moment (both for the in-story audience and for "us").

This is a very common trope in blockbuster comedies, and is also seen in a fair number of commercials and cartoons.

It is often seen on competitive singing shows, perhaps more often in the final rounds where there needs to be a showstopper. In fact, performing with a gospel choir back up on a show such as American Idol almost automatically qualifies for this trope, as it is virtually engineered to be "that" moment: a moment of Realness right there on Reality TV.

It also seems to show up a lot in musicals and 80s music videos. Here, it is often a Small Start, Big Finish, and as such: a. we can almost predict that the choir will arrive and b. we can fairly pinpoint the moment that they will.

This may be preceded by, be followed by, or contain a Whoopi Epiphany Speech, or may not. Sometimes is Played for Laughs, with the humor often being in the context that the choir appears.

What it is not: It does not immediately count if the gospel choir is the actual focus of the concern (except for Sister Act, which is an entire movie based on this trope). Again, they serve the narrative in one of these defined ways.

Compare and contrast with Gospel Revival Number, where the focus is more on the show-stopping music itself. This might include such "gospel-influenced" numbers as "Blow, Gabriel, Blow", "Sit Down, You're Rocking the Boat" or "Brotherhood of Man," but it's largely considered a Dead Horse Trope (though there are some overlapping examples), due to its similarity to That Reminds Me of a Song...

Compare to Ethereal Choir, Cherubic Choir and Ominous Latin Chanting, which are tonally and textually quite different. Often a subtrope of Suspiciously Apropos Music. And of course, this trope exists because it's common in actual Gospel Music.