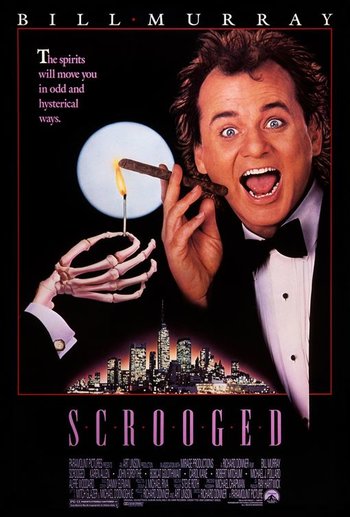 Frank Cross: I get it. You're here to show me my past, and I'm supposed to get all dully-eyed and mushy. Well, forget it, pal. You got the wrong guy!
Ghost of Christmas Past: That's exactly what Attila the Hun said. But when he saw his mother... Niagara Falls.
Advertisement:

A 1988 comedy film directed by Richard Donner and starring Bill Murray, Scrooged is a moderately loose modern-day retelling of A Christmas Carol, with the twist of taking place In a World… where everyone is already familiar with Dickens's tale.

Murray plays Frank Cross, a cynical, selfish network executive who's putting together a live TV adaptation of A Christmas Carol for a holiday special. Frank's own childhood memories of Christmas are less than fond, leaving him initially unable to appreciate the spirit of the season. However, things start to change after Frank's deceased former boss and mentor smashes his way into his office to inform him that he is doomed unless he changes his ways. True to the source material, Frank is subsequently visited by the three very strange Ghosts of Christmas Past, Present, and Future.

Intended to capitalize on Murray's success in Ghostbusters (1984), Scrooged contains a number of references to the earlier (if largely unrelated) film; one of the taglines was, "Bill Murray is back amongst the ghosts, only this time it's three on one." The supporting cast includes Karen Allen, John Forsythe, Bobcat Goldthwait, Carol Kane, Robert Mitchum, Michael J. Pollard, Alfre Woodard, John Glover, and David Johansen.

It's also pretty damn funny, but we shouldn't need to tell you that, right?